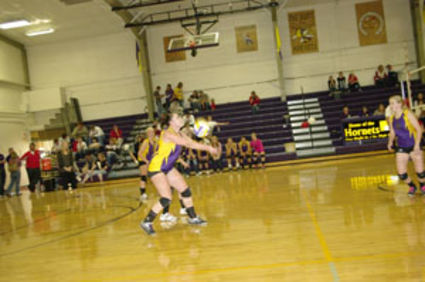 Pine Bluffs Lady Hornet Dana Mullins sets the ball during the Lady Hornets game against Lusk Monday night. The game was postposed due to an early winter strom that hit late last week. The delay did not adversely affect the Lady Hornets as they won in four sets, 25-22, 10-25, 25-13, 25-21.

The first winter storm of the season descended on Wyoming late last week causing delay and cancellation of some sports events. The Pine Bluffs Lady Hornets used the unexpected break to rest and get mentally ready for the visiting Lusk.

“Lusk was our homecoming match and our fans were very supportive which was awesome,” said coach Christina Nusbaum following Monday afternoon’s win. “Andrea Baker, who has been out due to a kidney transplant, was able to make it to the match so that was an added bonus; the team was excited to have her with us on the bench.”

The Lady Hornets won in...