Bird on a wire 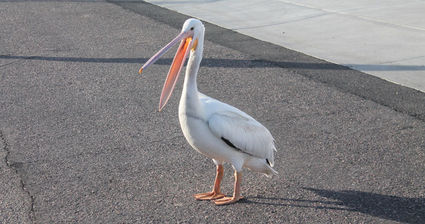 Pelicans and telephone wires do not mix.

A pelican flying over Pine Bluffs flew into a telephone wire on Thursday, according to Pine Bluffs Police Officer Char Madden.

The collision caused an injury to the pelican's right wing. The pelican was hanging around town hall until it was contained by David Ellsworth, of Wyoming Game and Fish.

Ellsworth said he will take the pelican to a veterinarian in Cheyenne to have the wing examined. The pelican will be released in a wetland or reservation, Ellsworth said.