Burns band learns from the source 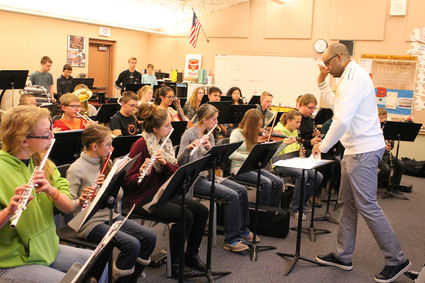 When the Burns Junior/Senior High School Band performs the song "Bullet Train" at their performance scheduled for December 8, it will take on extra special meaning because they recently had the opportunity to learn the composition from composer Darryl Johnson II himself. The experience was part of Johnson's "Meet The Composer" program currently traveling across the country.

"There's a certain number of things the teacher can share with students, but having a direct experience with the composer unlocks something within the students," said Johnson. "It opens their minds in a different way to something they see as fixed or set. They see that the composition is alive, the composer is alive and it helps them get into the mind of the composer and the thought process involved in creating a piece."

"I believe that he and the former BHS music teacher were trying to arrange a visit and it fell through due to conflicts," she said. "When he e-mailed me about the opportunity, I looked through his website and contract documents and knew it would be a great experience for the kids."

Johnson spent the first hour of his visit going over the arrangement for "Bullet Train", working on dynamics and tightening up the performance. After the band ran through the song a few times, Johnson then opened up the floor to band members for a question and answer segment.

"Everyone seems to get something different from it," Johnson added.

Schatz said it was important to find a piece of music that was playable for every grade level in the band.

"Since our band this year is a combination of 7th-12th graders, finding a piece that would be accessible to all levels and still interesting was my priority. Mr. Johnson sent us two songs. The high school band played through both and chose the song they wanted to prepare. The song is not holiday-themed in the least, but since the students have prepared it so well, they will share it with the community at our upcoming concert."

Johnson spent the final hour of his presentation working with the band members on how to compose music, taking suggestions from different members and then finally playing the brief piece they wrote.

The students aren't the only ones benefitting from the program. Johnson also gets great satisfaction hearing how his work is interpreted by different bands across the country and how it feels to hear sound erupting from a once-empty music staff.

"For me, that is the core of my existence," he said. "When that happens, that's when I am who I am. When I finally see a work come to fruition, as much as I enjoy writing music, when they play it, it allows me to be on top of the world for a least a little while. They need me to be them and I need them to be me. It's a synchronized experience."

Schatz said there were multiple benefits of the experience for the students as well.

"I want students to leave with a little more awareness of how music fits into and will continue to fit into their lives," she added. "I don't expect them to leave BHS and all be composers or performers, but I want them to leave and remember that there are lots of ways to enrich their lives with music. Hopefully they will remember the one time they met a cool guy from California and he shared his personal experience and expertise in music."

You can hear the end result at the band's performance scheduled for 7 p.m. on December 8 in the Burns High School Commons.