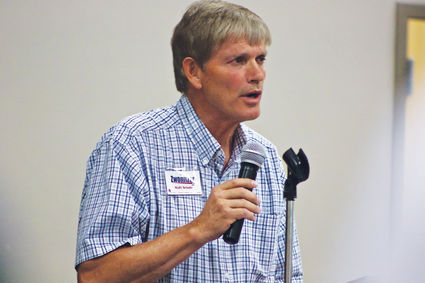 State Representative Dave Zwonitzer, R-Cheyenne, speaks to attendees at the Laramie County Republican Party's pie social at the Pine Bluffs Community Center Sunday. Zwonitzer is running for Senate District 6 along with former lobbyist Lind Kirkbride and local activist Anthony Brouchard. In addition to the candidates for the senate seat, candidates vying for the U.S. House, Wyoming House District 10 and the Laramie County Board of Commissioners were also in attendance.

During a Laramie County Republican Party Event in Pine Bluffs Sunday, a candidate for Wyoming Senate District 6 used his allotted time to attack his opponents.

Anthony Bouchard attacked State Rep. Dave Zwonitzer, R-Cheyenne, for legislation he has supported during his tenure in the legislature.

Zwontizer responded to the criticism.

Bouchard attacked Zwonitzer for supporting a joint resolution in 2014 that would urge the U.S. to voice its support for Azerbaijan. The resolution was not legally binding and was essentially a statement of support.