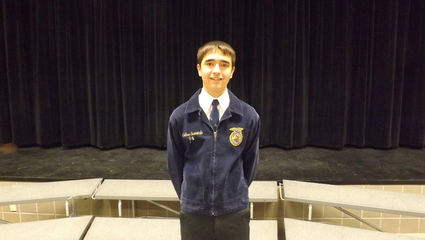 Colton Sowards, a junior at Burns High School, said he has learned a lot about leadership and self-development.

Burns junior Colton Sowards says FFA has taught him a lot about growing as a person.

"For me, FFA is all about leadership and self-development, really," Sowards said. "It's all about bettering yourself."

There are several activities within FFA that Sowards enjoys participating in.

He added, "I'm on the livestock team, the parli pro team as well as showing pigs and horses."

Sowards has won some awards as a result of his hard work.

"I won overall feed horse, that was the year before," said Sowards. "I also won for ranch sorting, stuff like that."

It's going on five years that Sowards has been...