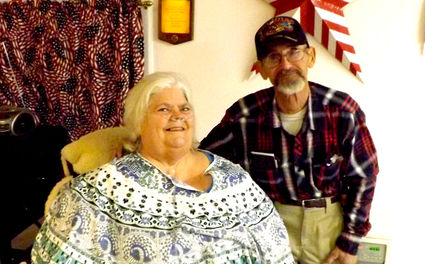 The happy couple, Jeanne and Lewis Laboray, pose for a photo inside the American Legion Post in Pine Bluffs.

Nicely situated in the north end of Bushnell, Neb. is the home of Mr. and Mrs. Lewis Laboray.

Guests arriving at the house will be ignored by the two cats, Pounce and Tommy Kat, surveying the world from their front yard. Passing through the open porch and knocking on the door, one is greeted by a friendly,"Come on in," from Jeanne Laboray, a good natured woman with a musical voice.

In the kitchen of this comfortable home, Lewis Laboray is stirring an elk chili for dinner. Laboray, a man in his seventies, was born in Granite City, Ill. He and his wife had moved to Bushnell in the late nineties when he went to work for the Frenchman Valley Co-op in Pine Bluffs.

"We had always planned to retire here," Jeanne Laboray said.

He currently serves as the chaplain of the Pine Bluffs American legion Post and Jeanne is a member of the Auxiliary unit.

He is a man with a twinkle in his eyes and a bounce in his step. His smile is ever-ready and gives the impression of a man who still gets a kick out of life.

For a time Laboray, in 1960, ran moonshine in Steward County, Tenn.

"I didn't make it, but I knew people that did. We didn't drive the highway, we went cross the mountains, cross the fields with it," Laboray said.

Prior to his induction into the Marines, Laboray worked as a carpenter in Illinois. At this time he was waiting to see if he could get hired on a bridge being built across the Missouri River. Since he was a member of the union in Ill., and the work was to commence on the Missouri side, there was some question as to whether the Missouri union would let him join on the work that figured to last three years. Tired of waiting and wanting work, Laboray signed up in February 1963 for the Marines. A week later, when it was too late, the Missouri union gave him approval to work with them.

When he had gone to sign up in February for the Marines, he was asked to delay his induction because the armed services were in the middle of a promotional campaign. They were swearing in recruits during episodes of a local St. Louis, Mo. television dance show similar to American Bandstand.

"The guy said, 'You can go in right now, or would you wait a week or two. We got a promotion going on,'" Laboray said.

Duly sworn and televised, he headed to San Diego, Calif. for basic. Afterward, he served for a time as a chaplain's assistant and then moved over to the radar lot.

"I was doing the classified documents for their tests and I had to go to a special room to do it," Laboray said.

When he left the states, he was bounced around, from Japan to China without assignment. On the way to Vietnam from China his ship was caught in a typhoon.

He arrived in Vietnam some where near Da Nang. He was then assigned to the new base the Marines were building at Chu Lai, 35 miles southeast of Da Nang.

"Then they sent me up to S and C, secret and confidential documents," Laboray said.

Shortly after, Laboray's sister died and he returned home on compassionate leave. Upon his return he went to S-1.

"I handled all the classified documents for the commanding officer," Laboray said. "Then I was on the currier run. I'd go up the hill and meet the choppers in the morning, pick up documents coming out of Da Nang, or where ever."

The base had two landing sites about two miles apart.

The curriers began to split up, with one group at either landing site and signing for the documents of the ones who were at the other.

Laboray left the Marines in 1967. He turned down the opportunity to re-enlist as he did not care for what the Marines would have had in store for him and some of his fellows.

"They wanted to make us all drill instructors," Laboray said. "We all got out."

The Navy, at that time needed personnel in Antarctica for a year or two and Laboray volunteered. However, he wasn't allowed to go on the basis of his nearly three year service in the tropics and the change in climates was deemed too drastic.

1n 1977, he joined the Army Reserves in Ill. as an avionics specialist. He chose the Army because he could go into that branch as a sergeant while the Marines would have required him to serve as a private.

His MOS was a 35 Lima and he worked out of Scotts Air Force base in Illinois until he and Jeanne moved to Denver where she worked as tax preparer and consultant. Jeanne continued her work when moving to Bushnell, still servicing 200 clients. She retired two years ago.

During this time he worked for Cooper Coating out of Casper as a sandblaster and foundry worker. He tried to find a unit to work with for the reserves. None were available in the area, so went to Fort Huachuca, Ariz.

"I"d go to summer camp at Fort Huachuca, Ariz. Every year I went I worked on the GPS set," Laboray said. "The antenna testing of it."

Unfortunately, he never collected enough good years with the reserves to earn a pension.

When he isn't in Pine Bluffs working at the co-op, Laboray spends time with black powder shooting, and, with Jeanne, participating in the Mountain Men Rendezvous, a celebration of the Fur Trade Rendezvous Era that occurred in the Rocky Mountains between 1825-1840. The participants will don various items of clothing from the era, all handmade. Some come as Indians, others as mountain men and women and some dress up in eastern clothing of the period. Jeanne makes the clothing for the couple, but Laboray pointed out that he does his own leather work.

He also casts his own balls for his rifles and has made his own sword for the mountain men rendezvous.

Laboray also brews his own wine, including one with jalapenos.