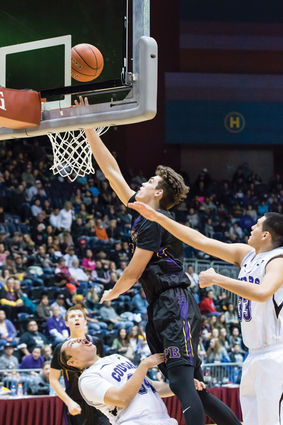 Pine Bluffs' Hunter Thompson (center) charges Wind River's Jarick Trumble on his way to the net. The Hornets lost the state semi-final game against the Cougars in overtime, 69-66. The loss sent the Hornets to the third-place game, where they lost to Lovell, 75-64.

Expectations were high for the Pine Bluffs Hornets this season. After rolling unbeaten through the regular season, the defending 2A state champions took out every opponent during the 2A East Regional Tournament in Gillette. So when the team hit Casper last Thursday, many were expecting much of the same. Apparently nobody told the Wind River Cougars or Lovell Bulldogs.

When you're thet top dog, everybody is gunning for you and wants to be the first to bring you down. That's what Wind River did last Friday.

The Cougars were the first to do what no one else could do for almost a year - beat th...