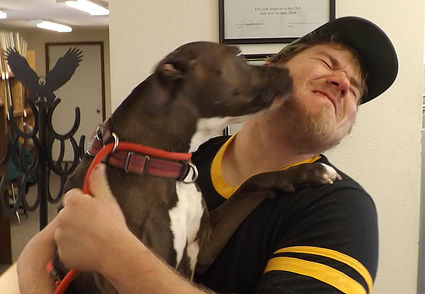 Bootzilla the Pitbull gives a kiss to Ethan Wilhelm, now of Pine Bluffs and a co-founder of "The Canine Stars," rescue dog traveling entertainment show.

With the wind howling and shaking the building, it was a perfect Sunday for snuggling in bed and that is precisely how Bootzilla the Pitbull wanted to spend her morning.

However, while stardom has its privledges, it also has its responsiblities. An interview had been scheduled and Bootzilla gamely got out of bed to meet her obligations to the public.

Seven-year-old Bootzilla is one of the stars of the traveling show, "The Canine Stars." The show was founded by Keri Caraher and Ethan Wilhelm in 2012. The show highlights such popular dog sports as dock diving, freestyle frisbee disc, flyball...