Mystery of the Pharaoh's Curse 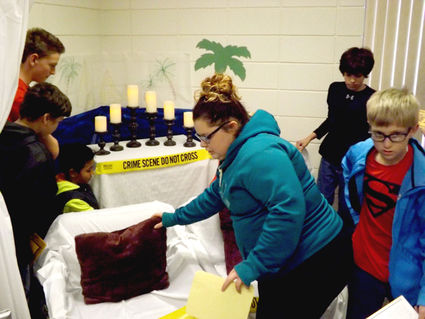 Hunting to find clues to solve the Mystery of the Pharaoh's Curse are, from left to right, Ethan Morrison, Kashten Martinez, Alex Flores (kneeling), Brooklyn Christensen, Felix Gregory and Gavyn Oakes. Sleuths not seen are Phoenix Cerenil and Grace Steenbergen.

Local kids were magically transported back to Egypt's Valley of the Kings last Tuesday when the Pine Bluffs Library hosted Teen Mystery Night.

Eight youths were split into two teams of four with the team of Grace Steenbergen, Ethan Morrison, Kashten Martinez and Alex Flores correctly deducing that Clare Burks had choked Amari Fahdi in an effort to protect her son from his own actions.

Fahdi had been named Queen of the Nile at the Junior/Senior Prom's "An Evening at the Pyramids" and, along with Burks, had fallen victim to "The Pharaoh's Curse." The other team was comprised of Brooklyn Chris...