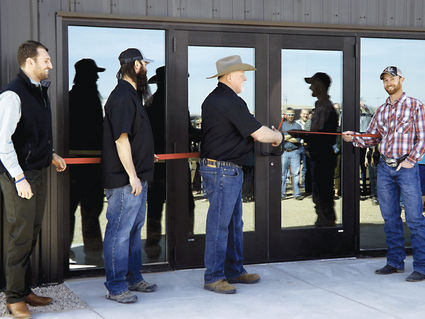 Derrek Jared, left, of Cheyenne Leads, looks on as Chad Brown stands to the right of his partner, Gene Purdy who is about to cut the ribbon at the Wyoming Malting Company's malting and distilling facility on Beech Rd. To the far right and holding the ribbon is Josh Imel, Supervisor of Construction of FCI Constructors of Wyoming.

After five years of dreaming, planning and work, two Pine Bluffs cousins are about to slap the Pine Bluffs brand on vodka and other spirits, while providing Wyoming malted barley to brewers across the state and region.

The dream began in the Las Vegas, Nev. garage of Chad Brown in March, 2012. Brown at the time was employed as a corporate securities investigator in Las Vegas for the Nevada Gaming Control Board. His cousin, Gene Purdy, a Pine Bluffs farmer, and his family had come out to visit him.

"We went out there for a NASCAR family reunion kind of deal and get together. That was when I saw he had a brewery system in his garage," Purdy said.

"Gene's mom is my aunt, my father's sister. Our grandparents owned a hardware store in La Grange, so they've been in the Pine Bluffs area for quite awhile," Brown said.

As the two talked, Purdy noticed the cost to Brown for barley as opposed to what Purdy was getting for a bushel.

"He had an idea of how many malt houses are there in the country," Brown said.

According to Brown, there are five malting facilities in the country that supply 99.9 per cent of the malt to brewers in the area. The barley that is grown in Nebraska, Colorado, Wyoming and the Dakotas is shipped to Canada, Wisconsin or Minnesota, malted and shipped back to this area.

"So our thought was, grow the barley locally, malt it locally and sell it locally," Brown said.

The dream was allowed to ferment in the minds of Brown and Purdy for two years until March, 2014 when the planning began.

Brown moved to Pine Bluffs with his family.

The men formed a business plan before meeting with the Wyoming Business Council in December, 2014 and again in January, 2015 who in turn introduced the partners to Cheyenne Leads. Cheyenne Leads partnered with the pair and will own the building where Wyoming Malting will produce their product in a landlord/tenant relationship.

The company had their ground breaking ceremony on July 1, 2016 with construction beginning on September first of the same year. On March 20, 2017 there was the ribbon cutting ceremony. The construction of the building was done by FCI Constructors of Wyoming. Josh Imel was lead on the project. He and his crew are putting the finishing touches on the facility.

While this is going on, the cousins are in the process of making the final connections of their equipment to bring the barley into the building to their malting drums.

"We have all of our malting equipment in. We're working on installation. We should be done installing it this week. We are still waiting for our computer control panel to get here, then High West Energy is going to do all of our wiring for us and they have bid that out as a four week, five week job," Brown said.

They plan to produce 460 tons of malt per year of which 85 to 90 percent will be sold to outside brewers and distillers. Purdy's farm will be the primary supplier of the barley.

"Right now, all the barley right now. But if I can't produce enough we'll have other people raise it," Purdy said.

Brown and Purdy have toured most of the state and its breweries to get the word out about their operation. However, while there has been interest in their operation, no one is going to commit to a contract with the company until their malt is independently tested and potential buyers are sure that Wyoming Malting is producing a quality product. As yet, they have no contracts.

Wyoming Malting will not have a brewery on site but the will distil their brands of vodka, whiskey and gin. Vodka will be the first product bearing the Pine Bluffs brand,

"We'll produces spirits not beer," Brown said. "It will be under the Pine Bluffs distilling brand, but we don't have a name for our vodka yet."

The front of facility has a large room where the company has a bar built and two long tables for seating. This is their tasting room.

"We don't envision it as a bar. What we can sell on site is only what we make in that room," Brown said. "We're not going to be competing against Knotty Pine and Pine Bowl. What we would love to have is tourists to come to our facility to see the malting side, the distilling side, you know, and once they're in Pine hopefully they go to Pine Bowl. Hopefully, they go to Knotty Pine, 307 and Rock Ranch and spend a little money in town."

The company intends to employ five people initially and look to bring that number to 15 when their operation is working at capacity. The cousins are optimistic that their locally grown barley and malted product, in this the only malting house in Wyoming, will fulfill the gamble began in Las Vegas at a NASCAR party five years ago this month.