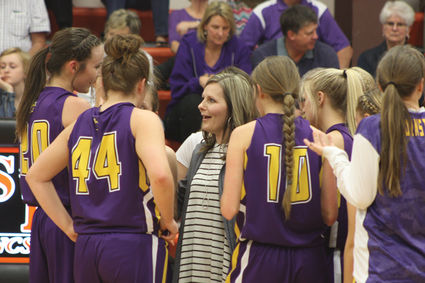 After coaching the defending state 2A basketball champion Lady Hornets through an undefeated regular season and guiding her squad to the 2A Southeast Regional Tournament and the 2A State Tournament, the Wyoming Coaches Association recently named Pine Bluffs girls basketball coach Lindsey Forbes (center) as its 2A Southeast Girls Coach of the Year.

Backed by an impressive 24-game winning streak which saw her team go undefeated during the regular season and 8-0 in conference play, and finishing with a 25-3 record, the Wyoming Coaches Association recently named Pine Bluffs girls basketball head coach Lindsey Forbes its 2A Southeast Girls Coach of the Year.

Pine Bluffs Athletic Director Kendra Roeder said the root of winning and leadership extends as far back as Forbes' days as a player.

"She was an assistant to Bob Cochran for several years before he retired, which she then assumed the position as head coach," said Roeder. "She's done a...