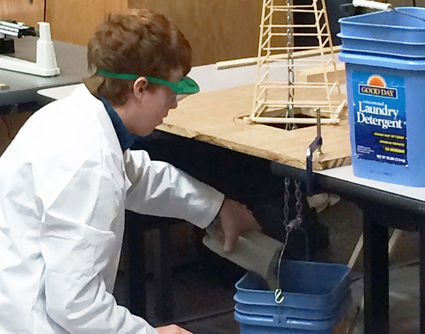 Burns junior Tyler Humphrey puts sand in a bucket to see how much weight his tower could support before breaking during the Wyoming Science Olympiad competition last Saturday, March 25 at Casper College.

The competition took place at Casper College campus on March 25. The WYSO is open to junior and senior high schools across the state and consists of two divisions: Division B for junior high students, which may contain 5 ninth graders, and Division C for high school students.

Eric Nelson, Physical Science, Physics, and Chemistry at Burns Jr./Sr. High School is the sponsor for the teams.

"Science Olympiad is a bit like a track meet of science events. Students can pick up to 4 events," Allen said. "Some events involve building things, such as a tower, a wind generator, or a hovercraft. For example, in the towers event students build a tower and then determine how much weight it can hold before breaking."

Freshmen, Rylee Nichols and Gracie Keiter competed in Division B and took first place in the Food Science event for their simple calorimeter. They burned food inside of it to find the amount of calories in the food. In the Reach for the Stars event they took a second.

While the students competing in Division C for grades 9-12 did not bring home a team trophy, they faired well in individual events.

Kestrel Medina and Roman Delgado, both seniors, took seconds in Chem Lab and Towers. Wyatt Ebben and Keenan Manlove, freshmen, also earned a second but in Hovercraft and a third in Astronomy, while Ebben took a solo third in Optics. Alexandria Williams, junior, had a third place in Materials Science. Also competing were were Sabrina Vorse, junior, and Connor David, freshman.

"This was the first time Burns has won a team trophy in our five years of competing. I was proud of how hard the kids worked and how much they learned," Allen said. "These events involve a lot of trial and error. Often the first try at a project fails and the idea has to be reworked."