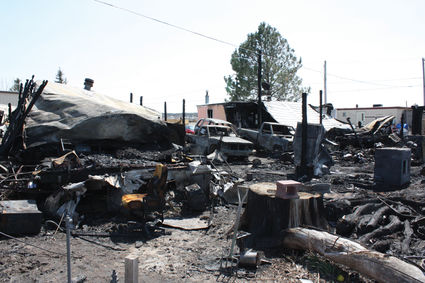 Firefighters from Laramie County Fire District #5, assisted by crews from Districts 1, 2, 3, 4 and 6, responded to the scene of a residential fire that fully engulfed two mobile homes and several vehicles early Sunday morning. Officials said all occupants were accounted for but the cause of the fire is still pending an investigation by the Wyoming State Fire Marshal Office.

Two Pine Bluffs families were left homeless following a fire that broke out in the early hours of Sunday, April 9.

At approximately 1:35 a.m., firefighters from Laramie County Fire District #5 were dispatched to 1279 North Main St. in the Pine View Mobile Home Park after a report of a structure fire.

Upon arrival of the first responding crews, two outbuildings were fully involved in fire. The fire had also already spread to two mobile homes and a third non-mobile home was also threatened. Pine Bluffs Police and LCFD5 personnel, along with other residents, got all homes evacuated.