Local artist's work goes from the campground to the lobby 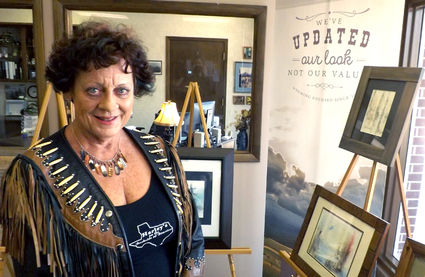 Local artist Marcia Pavlica pauses in the lobby of the Wyoming Bank and Trust branch in Burns, where an exhibition of her artwork is on display. Her artwork will be available for viewing through the remainder of April.

Tucked away in a RV park east of Cheyenne and the TA Truck Stop are two antelopes reposing at the bottom of a swimming pool at the WYO Campground.

As antelope are neither fish nor aquatic fowl, the curious traveler may indeed wonder how two of the beasts had come to be there. Not surprisingly, they will soon discover their presence is the result of art, not nature.

They are the work of artist Marcia Pavlica, who along with her husband Mike, is the owner of the campground. Pavlica stated that it was not easy painting the two creatures on the bottom of the pool.

"Held my breath for a long time to do that," Pavlica said. "That's what I tell the campers."

She practices her artwork in relation to her work running the campground.

"There's not a whole lot of story to tell," Pavlica said. "Just run around, park campers and do art."

She painted the signs for the place, though at times her work has been extravagant enough to bring her husband Mike to caution.

"Kind of go crazy. Paint the signs, I'm not a very good sign painter, like in front of the campground, the signs out there, stuff like that. Some of it, it's okay, but Mike comes out and he goes, 'No!," Pavlica said.

None of this meant to convey that when it comes to art, Pavlica is frivolous. Rather, it is to suggest that she, like many an artist before her, has a touch of the eccentric and her work is eclectic.

In fact, a portion of her collection of fine art is now on exhibit in the lobby of the Burns, Wyo. branch of Wyoming Bank and Trust.

Lorna Dunlap is the branch manager and is responsible for the exhibit.

"We have tried for several years now, and been very successful, to have on display local artists. Not necessarily bank customers but just anybody in the community just to display their artwork," Dunlap said.

Pavlica, who had come into the bank one day was looking over one of the exhibits and began to talk with Dunlap. In the process of time, Dunlap asked Pavlica if she had any of her work that she wished to show.

"I had heard that she had done some artistry and we coordinated over the next few months just to make sure she was here and the time was available," Dunlap said.

It should be noted Pavlica does not actually give titles to her work. She does not like to put labels on it.

"You're supposed to. I don't," Pavlica said.

Her most noticeable piece, the one that first catches the eye, is a painting of an indian.

"I don't like the Indian," Pavlica said. "It's too cartoony. Its alright. Its eyes are kind of weird."

Indeed, the painting is jovially macabre, challenging and not to common taste. Yet, it has a quality that is inviting.

For sublimer tastes are two almost ethereal pieces, textured and giving a hint of three dimensions.

"It's just strips of paper. I just glued it all on, smashed it and smooched it all around," Pavlica said.

Pavlica, who's almost shy when speaking of her finer works, overlooked the subtlety of the pieces. The painted textures bring out a different perspective from changing vantage points. Yet, the paintings are simplicity themselves. The vibrance of the paintings comes from the finishing application.

"It's like a glue but it dries clear. Kind of like Elmer's Glue, but it's a gesso that you put on paintings to make 'em shiny," Pavlica said.

If photography is of an interest to a patron, Pavlica has two on display which might be pleasing to any eye. One in particular is exemplary of an approach she took early in life to her art.

"I remember I was the only one in first grade that would draw the sky down to the ground. The blue, most people do the blue up at the top and the ground at the bottom with a white space in between. No, I make my blue go all the way to the ground," Pavlica said.

The scene in question was taken at Tanglewood Lake, Delhi, NY. Full of fall colors are trees standing and reflected in the waters of the lake. The genius of the piece is evidenced in the lack of differentiation between reality and reflection. Upside down only the most discerning eye can see the difference. Pavlica truly brought the sky to the ground.

Also on display are two of her quilitings. Her mother is a quilter of talent, according to Pavlica and Pavlica is not shy about who is the better at the craft.

"My mom's in the Quilters Hall of Fame in upstate New York. Therefore, whenever I go to see her I end up quilting quite a bit. I do it at home but I don't have her judging me so they turn out kind of funny."

Pavlica's work will remain on display at the bank until the end of the month. If you should miss the show, you can always head to the WYO Campground and check out the antelope at the bottom of the pool and maybe Pavlica will show you her studio, though according to her, it is a little messy.