Fornstrom hopes to make a difference 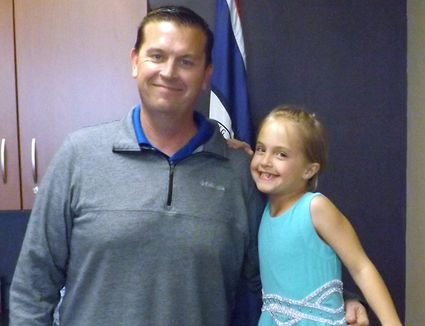 Candidate for town councilman, Justin Fornstrom in Town Hall, with his daughter Keefer, for the candidate Meet and Greet, April 12.

Farmer and local businessman, Justin Fornstrom, is seeking the office of town councilman in the upcoming May 2 town elections.

He is one of three candidates hoping to secure one of the two vacant seats, one of which has been held for eight years by his brother, Mark who is stepping down from his seat. Justin Fornstrom states that while they are brothers, their styles are different.

"My brother and I own several businesses, we have the NAPA Auto Parts store, are farmers and the owners of several other commercial interests around," Fornstrom said."But I don't talk as much as my brother."