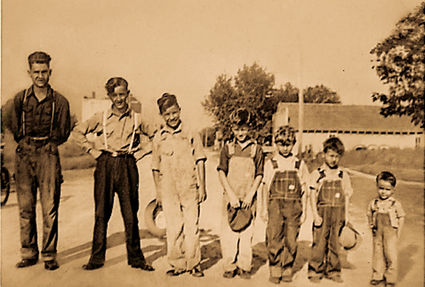 The seven Eisenhauer Marines in Wallace Neb. on moving day in 1942. They are about to leave for Pine Bluffs, Wyo. From left to right are Don, Delbert, Bob, Lloyd, Tom, Howard and a long time nobody, Little Poot.

Donald Eisenhauer was born in Wolbach, Neb. on March 28, 1924 to Harry and Truly Eisenhauer. In 1926, his brother Delbert followed him into the world. Two years later came Robert, then in another two Lloyd was born, followed two years later by Tom. Another two years saw the emergence of Howard. Then a long time nobody: That's Loren or "Poot" who was born five years later in 1939.

"You should see the Denver recruiting stat...