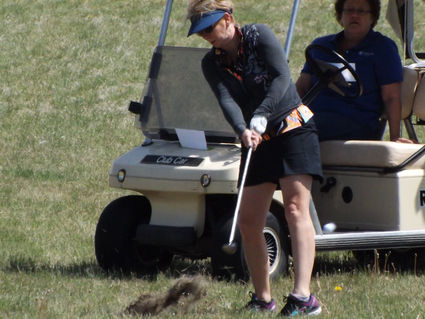 Kim Greenstreet blasts her ball out of the prairie grass on the eighth hole of Leaning Rock Golf Course during the 13th annual Knights of Columbus Tournament. Watching from the cart is Joyce Person.

The nine-hole tournament is held in a shotgun or scramble formation, with each foursome beginning at separate holes. After teeing off, the groups converge at the longest hit ball, where all four hit from. This is duplicated until the ball is in the cup and the score for the foursome is recorded.

Winning the tournament with a score of 31 was the team of Bob, Tim, Jeremy and Don Eisenhauer....