Drama club acts in a one-act 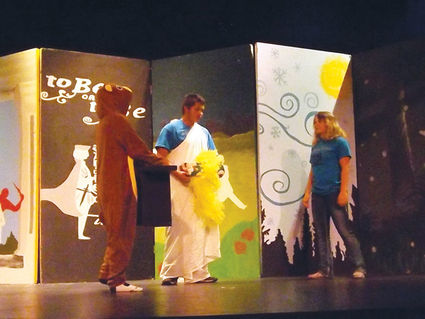 Sydnie Fornstrom, as the bear, Julian Baca-Martinez, as Julius Caesar, and Natalie Christofferson, as Juliet in the Pine Bluffs High School Drama production of "Bill Shx Presents: All's Well That Ends (an introduction) by Jaime Cruz.

A play within a play, a little Romeo and Juliet, Hamlet, sword fights, dances, a dancing bear, or what you will were all part of the fare served up by the drama students of Pine Bluffs High School (PBHS) drama club last Tuesday night.

The night with the Bard saw the Pine Bluffs students perform the one act, Bill Shx Presents: All's Well that Ends, written by Jaime Cruz of Casper. This is the fourth play by Cruz to be performed by the drama club.

"PBHS Drama always gets a wonderful group of kids. We have kids that are involved in many different things, but made it a point to attend rehearsal...