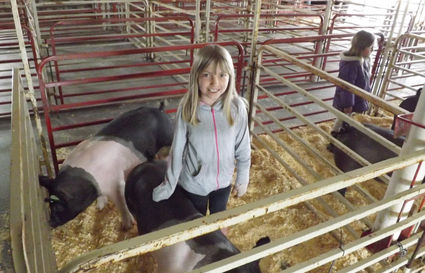 Riley McGregor, left, with her pigs April and Paisley, is in the pen next to her sister Paige whose two pigs are named Patches and Pokey.

While is it has been a major part of the Grover FFA program for decades, Alex Sanders, the chapter's advisor is unsure of exactly when it started.

"It's one of the first shows in the season and provides a relaxed environment for students who are at a show for the first time. We rely on several donations to support and run our show," Sanders said.

The stock show took place at the Earl Anderson Memorial Rodeo Grounds Saturday, May 27. The day began chilly with the threatened possibility of showers. Even so, participants began showing up before 8:00 a.m. with their pigs, goats, sheep, cattle a...