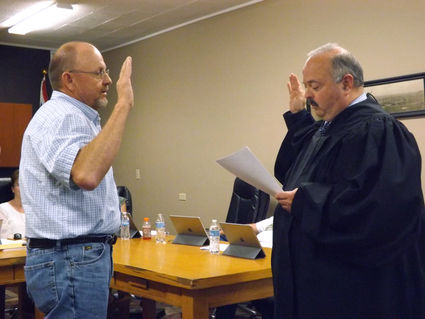 Alan Curtis, left, repeats the oath of office administered by Judge Mark Moran, standing, and assumes the office of mayor for the next four years.

Following the usual meeting preliminaries, the Town Council of Pine Bluffs Monday night welcomed two new members and one old, but in a new position, to their ranks.

Sworn in for a four year term as mayor was former councilman Alan Curtis. This was succeeded by the swearing in of Jana Kestner and Donn Randall to their terms as councilmen.

The two newcomers to the governing body comported themselves well and gave little indication of their inexperience.

After the swearing in, and the approval of the consent agenda, the first item of new business was the selection of boards and commissions. Pr...