Steilow retires from FVC after 15 years 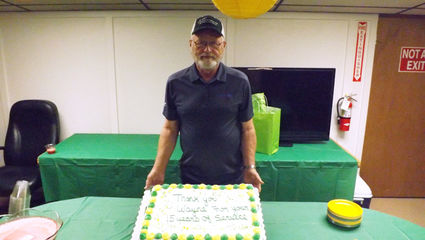 Wayne Steilow upstairs in the Frenchman Valley Co-op shop holding his retirement cake. He has served the co-op for fifteen years and now his time will be his own.

Gloria Steilow is not concerned that her husband will be getting under foot around the house now that he is retired from the Frenchman Valley Co-op after 15 years.

"He'll be at home by himself with the horses, 'cause I'll be at work," said his wife Gloria who works at the Kimball Health Clinic.

Of late, and up until his retirement from the co-op, Steilow was delivering fuel and propane for co-op customers. He serviced southeastern Laramie County, some of the Nebraska panhandle and Weld county, Colo. as far south as Grover. He stated that he will miss most of the customers.