Neville lives a life on the run 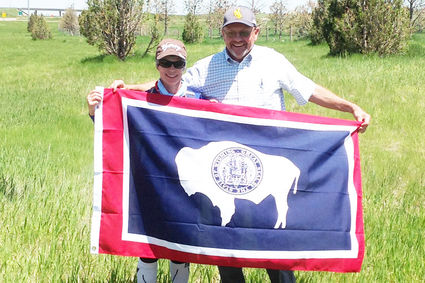 Three days after Glenn Offerman rode his bike across the state line into Wyoming on his way to Sacramento, Calif. to raise money for his sister who has cancer, five-time cancer survivor, Helene Neville crossed into Nebraska after running across Wyoming.

"My whole project is to just really look at our country and the people and tell the story about how amazing and wonderful everybody is, but I can't tell it unless I visit every state," Neville said. "Well, I started in Wyoming, May 1 at Evanston and I've been sick ever since."

Neville suffered from altitude sickness at the beginning of a journey that was to take her from the western Wyoming border, through Nebraska, Missouri, Kentucky, West Virginia, Tennessee, Arkansas, Oklahoma, Kansas, Colorado Utah and ending in Las Vegas.

"Day two, I was in the hospital with altitude sickness," Neville said. "I did ten miles and I found this old dirty stuffed animal, it was a bunny. I picked it up and an old license plate and I'm staggering on the side of the interstate carrying the bunny and being passed by the ears. And then I looked and there's a mental institution. But as it turns out, everybody just came to the rescue. There isn't a better story than what I've lived the last 30 days."

"My journey: It started in 1998. At that time I was told I wasn't going to get better. I simply didn't think that I was going to make it. Confronting my own mortality, I thought, if this is it for me, if I'm really, truly not going to make it, what more can I do, what do I wanna say before I go. My first thought was to replace bad memories my sons probably had at that time. I was sick for several years and just started creating memories for them every single day. I was living in Iowa at the time and rather than sit home and wait, I went running. I left the hospital that day, went home. They said to get your affairs in order and I signed up for the Chicago marathon," Neville said.

Extreme spring storms and high altitudes, however, nearly stopped Neville in her tracks as she began her run in Wyoming.

When Neville entered Pine Bluffs on June 2 she was treated to a lunch sponsored by the Town of Pine Bluffs and hosted by High West Energy in their local office. Introduced by then Councilman and Mayor-elect Alan Curtis, she was eager to meet the citizens of Pine Bluffs and spread her message to "Re-think the impossible."

"I hope that my run is a window into the truth, a glimpse into the miracle, true miracle and to the mystery and the magic of who we really are and the basic nature of human connection. The unity of all things," Neville said. "If I can give you any advice: Don't wait for any life threatening event to start doing what you want to do. Don't miss out on life by not participating in it."

"You can accomplish little by yourselves, but we can accomplish everything together. My runs called one on the run, meaning, one, that we're all one and when we realize that we're all one we can do everything. We can do anything we want.We have the opportunity to focus on that which unites us or that which divides us. I focus on uniting," Neville said.