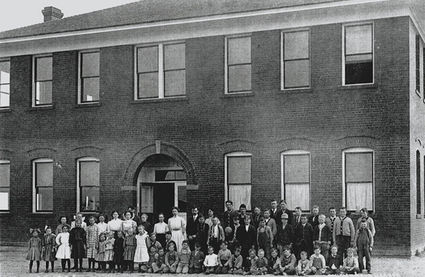 The date of this picture is unknown. The photo is of the Pine Bluffs School that was built in 1910 and housed grades up to the tenth. It was outdated and crowded by 1917 when the new school was built for students of Pine Bluffs, that would include a four year high school.

The May 18, 1916 edition of the Pine Bluffs Post headline announced a special election, set for May 27, in which the citizens of the town were to decide the fate of a $20,000 bond needed to build a new school.

The following article went on to say, "More room is badly needed not only on account of the present crowded conditions, but in order that two more grades can be added to our high school in order to meet present demands."