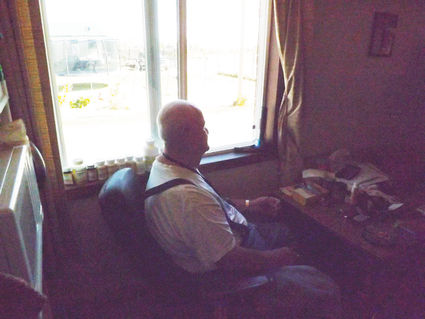 Tom Morgan sits at the window where he spotted a possible rattlesnake last week. A cat was marking the telephone pole visible from Morgan's window when it leaped in the air and took off. Morgan did not pursue the snake.

A report was received by the Post, Wednesday, July 21, regarding a rattlesnake spotted on the east side of Pine Bluffs.

According to Edna Hickman, the predator was last seen on Beech Street.

A quick survey of the area revealed no further evidence of the unwelcome visitor. Further investigation, the following day, revealed that Tom Morgan, who lives in an apartment of the Cheyenne Housing Authority on Beech Street, originally spotted what he believes was a rattlesnake.

According to Morgan, he was surveying the world outside his widow. He reports that a black cat had come to the tall grass b...