Don't judge a rabbit by its color: Even when it comes in a book 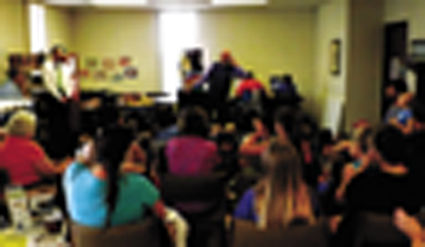 Mr E., center with hand to his ear is waiting for the called for response of "Yeah' from the crowd.

For a moment it appeared that Mr. E and Kyle Groves of Party People Productions would be proven to be inept magicians at their magic show held at the Pine Bluffs Library, Friday afternoon on July 19.

Mr. E was performing his illusion of Fraidy Cat Rabbit. Sliding open a panel of his device, Mr. E exposed the easily scared rabbit. He exhorted the 48 children and 17 adults attending the performance to then loudly yell "Boo." After they did ,he reopened the panel to reveal that the black rabbit had turned white.

However, one brave young man in the audience had noticed how clumsily Mr. E had pe...