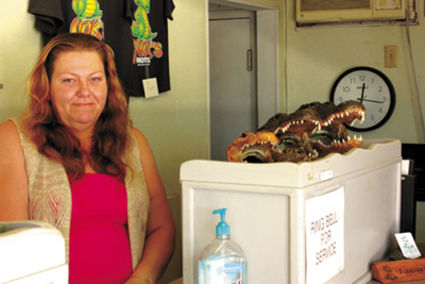 Those gators, at the Gators Motel, don't bite, but if you mess her motel, Michelle Marin might.

Early Saturday morning, November 28, 2015, around 1:45 a.m., a caucasian male and female, brandishing a firearm, held up the office of the Gator's Travelyn Motel in Pine Bluffs, and made away with an undisclosed amount of cash.

The suspects roused Francisco "Pancho" Marin from sleep when they rang the bell at the office door.

Pancho and his wife, Michelle, have been the caretakers of the motel for the past ten years.

Almost two years later, when talking with Pancho, one gets the impression that he would like another shot at the pair, but he would prefer to put the memory of that night aside...