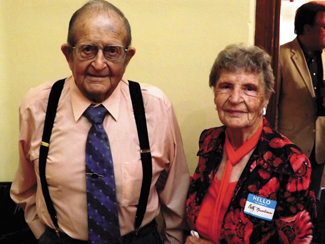 Leroy Gardner, left, and Betty Nussbaum at the 100th Alumni Reunion Saturday night at the Historic Pine Bluffs High School. The pair are graduates of the Class of 1947.

Burns Councilwoman Betty Nussbaum, Class of 1947 has to yet miss a Pine Bluffs High School Alumni Reunion Banquet and Jack Harrison, Class of 1951, has missed only one.

Harrison is the nephew of Alfred "Pete" Carlstrum, who was a member of the first graduating class of Pine Bluffs High School in 1918. Carlstrum, for whom the athletic field has been named, was the lone boy in his class amongst four girls, Gladys Wilkinson, Valedictorian Loretto Erickson, Olive Skitt and Elta Moore.

Harrison, along with his wife, Glennis, Class of 1952, have only missed the one reunion in 66 years. On that occasion, in the late '70's, they were traveling with their daughter Marjorie Gorman, Class of 1973, and were in Egypt at the time.

Councilwoman Nussbaum stated that she herself has not missed a reunion in the 70 years since her graduation.

"I used to help set them up," Nussbaum said.

Attending also this year was Leroy Gardner, who was a classmate of Nussbaum.

"We had a good attendance. I think everybody had a good time," said Linda Talkington of the Alumni organizing committee.

Those who were determined to have traveled furthest for the reunion were Greg and Deb Wilhelm of Lake Havasu City, Arizona.

The gymnasium, where the banquet was held, had tables alternately covered in purple and gold table cloths and with purple light bulbs in the ceiling fixtures.

The evening began with a social hour at 4:30 p.m. which was supposed to last an hour but went about a half an hour longer, with the business meeting following.

Around 5:00 p.m. that evening a heavy downpour covered the venerable high school building which brought to mind the occasion of Glennis Harrison's own graduation in 1952. She was valedictorian of her class and Mr. Clayte Hume was still superintendent of the school.

According to Mrs. Harrison, and others, Mr. Hume was a very proper gentleman indeed. Mrs. Harrison related that valedictorians were required to give their address without benefit of a microphone and to have memorized their speech. Well, on the night of her graduation it rained much like it did on Saturday night. However, during her speech the water began to flow into the gym itself and most of her attention was taken up by this and the worry of how much damage the water might do to the floor of the gym. She stated because of this she does not remember what is was she spoke about.

There was discussion during the business meeting regarding the 2018 Alumni Banquet, but only one person stepped up to volunteer as an organizer, according to Talkington. Due to these circumstances it was decided that this year's organizing committee will consider suggested options and make a decision regarding next year's banquet, leaving things pretty much up in the air at present.

Following the meeting a catered Chuck wagon dinner by Fred Woods was served.

Dean Bowman served as emcee for the evening and Shirley Hall was the pianist. Entertainers, Two Guys with Bow Ties performed such numbers as "Ain't that a Kick in the Head," Further entertainment was provided by Georgeann Wearin and Matt Hockersmith. Hockersmith was just coming off his final performance as Dusty Rhodes in the 2017 melodrama, and closed out the program with a rendition of "The End of a Perfect Day."

A dance was scheduled to follow the entertainment, but according to Talkington, it rather fizzled out.