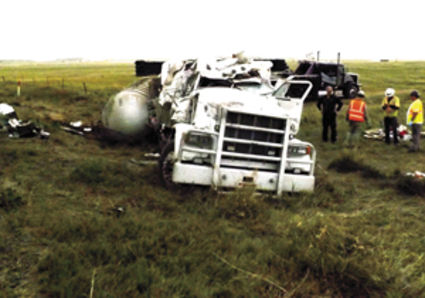 The driver of this semi was able to walk away without injury from this accident at the intersection of Road 122 and Road 390, at 2:00 a.m. Friday morning. To the left of the damaged vehicle are hazmat personnel and the tow truck driver who was about to begin removing the vehicle.

According to Dan Harms, assistant fire chief of the Pawnee Fire Protection District, there was a heavy fog at the time of the accident. The driver of the semi, Alfred Barlow, 49, of Watford City, N. D., was heading south on Road 390 and failed to negotiate the curve in the road and rolled over.

According to Trooper Reid of the Colorado State Patrol, the crash report has not been completed at press time.

According to personnel still on the scene at 11:00 a.m., Friday morning, oil was detected leaking from the tanker. Hazmat personnel on the scene would not comment further.