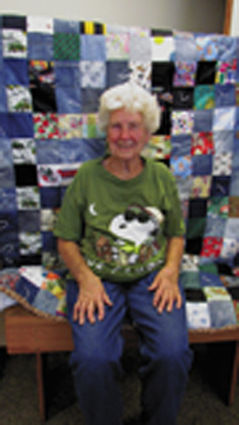 Beulah Klingsmith sits against one of the many quilts she has made.

A little over two weeks ago a letter from Mrs. Lola Nussbaum, of Grover, Colo., was received in the mail and it was addressed to the editor of the Pine Bluffs Post.

It began with some rather nice compliments for the paper, which were appreciated and hopefully merited.

Mrs. Nussbaum's letter, in the second paragraph, detailed her constructive criticism of the handling of the section, "Looking Back," the paper's weekly gathering of stories out of it's archives. While never initially appreciated, criticism should always be considered on its merits and after due deliberation it was determined t...