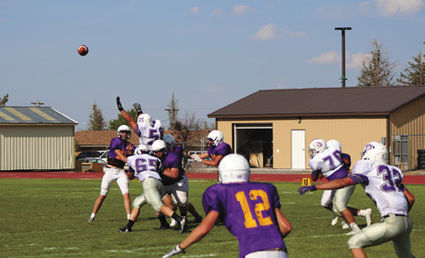 No. 10, Haize Fornstrom throws a pass to an open No. 12, Seth Tangeman during last Friday's scrimmage against the Glenrock Herders.

With the Pine Bluffs Hornets Football set to begin the defense of their 2016 2A State Championship against the Mitchell Tigers this Friday, the team got in a little preseason scrimmage with the Glenrock Herders Friday, August 25.

"Playing a team like Glenrock is good for us. They are big and physical. Their defensive line is the best we will see all year. It was a good test for where we are at and tells us where we have to improve," said Will Gray, seven year head coach of the Hornets.

Gray is joined by Brian Anderson as defensive coordinator and coach of the running backs and linebackers, Nate Hellbaum as offensive and defensive lines coach and Travis Werner as receivers and defensive backs coach. Gray will coach the quarterbacks and in his words, "roam wherever I am needed on defensive days."

The Hornet offense was able to move the ball well against the Herder defense, but were stopped short of first down on several occasions. The offense had less success moving the ball up the middle than they did to the outside. However, a preseason scrimmage is the time to work out the kinks of the offense and find the ways to improve.

Ishmael DePaulitte, a 2017 Panhandle Prep Sport Magazine top-rated athlete, who had missed a couple of weeks of practice due to a rib injury, was in the lineup. He made a nice end around run for about ten yards and gained another ten, after the catch on another play. DePaulitte had asked Coach Gray for some playing time in this week's JV game to get in some of his missed reps.

The Hornet defense came against a stout running game by the Herders. Glenrock was able to move the ball well on the run. It should be noted that most of these runs were for short gains. Three to four yards per carry were the norm. With the Herders pushing the Hornet line, it might appear that the local team was outmatched, but they only bent and were not broken.

Glenrock was not quite as successful with the pass and the Hornets' linebackers and defensive backs were tight in their coverage of the Herders.

"I thought the kids competed well and we did a lot of good things. We took a step forward and got tougher in the process of competing," Gray said.

According to the 2017 Panhandle Prep Sport Magazine, DePaulitte, Jeffries and Haize Fornstrom are their top-rated returning prep football players.

"We should be solid, but we have a lot of holes to fill. We lost a very special senior class and they will be tough to replace. In the end, if we continue to improve our strength. . . and our blocking and tackling as the season progresses we will have a chance to compete," Gray said in an interview with the Panhandle Prep Sports Magazine 2017 Fall Sports Preview.