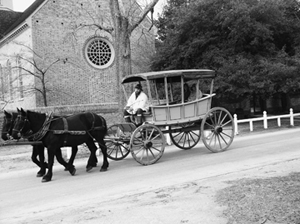 Transportation such as above was used prior to the automobile.

The following story is taken, with permission, from the book, "My footprints on the Sands of Time," which is the memoirs of C. George Karlstrum. Karlstrum, along with his wife, Ruth, operated the Carlstrum's Dry Goods store on the northeast corner of Second and main Streets in Pine Bluffs until 1957. Karlstrum's memoir was edited by his grandson, Doug Gibson, who has graciously allowed to run the following story from them.

(I'll start with my memories of) residents of Pine Bluffs in 1904 and on:

Summer Miller, who built the house at the south end of Main Street, was cashier of t...