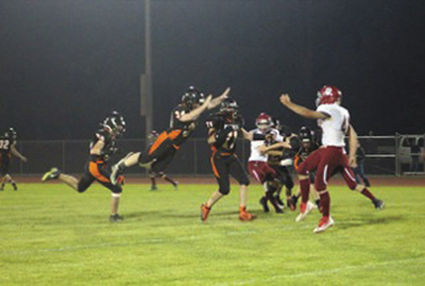 Burns attempts to block a kick against the Lusk Tigers.

The Burns Broncs took on the Lusk Tigers last Friday night in Burns, drawing first blood, twice, in the space of three minutes and 26 seconds in the first half.

After scoring the first two touchdowns, however, the Broncs came up short, losing by a score of 26 to 12.

#32 Tyler Norris, quarterback for the Broncs, hit #21 Alex Pyle for a 56-yard touchdown with 10:18 left in the first quarter. An attempted two-point conversion run by #34 Boe Clayson came up short.

Minutes later, Norris hit Pyle again, this time for a 25-yard touchdown. Unfortunately, another attempt at a two-point conversion by...