History retrospective: Wyoming's most combat decorated unit in a decade 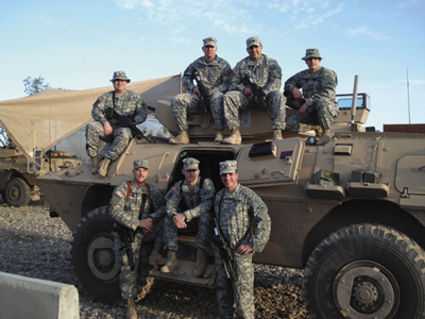 Courtesy of the Wyoming National Guard

The 1041st Engineer Company deployed to Iraq in 2006 and conducted convoy and friendly forces escort missions during a long and active tour. The company returned to Wyoming Sept. 2007, a decade ago this month, as the most combat decorated unit in the Wyoming Guard since the Korean War.

CHEYENNE, Wyoming – September marks a decade since the return of the 1041st Engineer Company Assault Float Bridge of the Wyoming Army National Guard, which deployed to Combat Operations Base Speicher in Tikrit, Iraq, in support of Operation Iraqi Freedom.

The unit returned the most decorated unit in the state since the 300th Armored Field Artillery fought in the Battle of Soyang in May 1951 during the Korean War.

The 155 engineers left to provide security forces to commercial convoys throughout Iraq during the surge of American troops. Insurgents were pushed northwest into the Sunni Triangle and where the Cowboy soldiers encountered frequent insurgency strikes in the form of powerful roadside improvised explosive devices along well-traveled Main Supply Route Tampa.

According to then Sgt. Shane Whitworth it seemed the convoys hit on IEDs almost every day in December 2006.

"That's when things got pretty Western out there... It just seemed like we were getting hit every night," he said. "And we're thinking, man, when is this going to stop?" His armored security vehicle was virtually destroyed by a large roadside IED, yet he managed to drive it on all flats, while suffering a concussion. He made it the last six miles of the route to Q-West, Qayyarah Airfield, roughly 110 miles north of Speicher. This was the kind of danger the unit faced more often than not.

Directed by company commander Capt. Nona Nissen, who the troops called 'Mom," and executive officer Capt. William Patton, all the troops took turns on convoys. Nissen, now retired wanted everyone to know about the hardships the line troops faced during these dangerous missions.

The unit received a Meritorious Unit Citation for its service from Oct. 23, 2006 – Aug. 3, 2007. Soldiers earned 37 Bronze Stars, one with 'V' device and 12 Army Commendations Medals with 'V' device. The unit also was bestowed 36 Purple Hearts, and 103 Combat Action Badges.

According to reports, the 1041st had 175 enemy contacts, and 120 of those were IEDs amid an estimated 189 total missions.

"Things could have been much worse, but the unit was blessed," said Sgt. Maj. Jason Spaulding, a platoon sergeant in the 1041st deployment. "There is no such thing as luck in war."

The unit had soldiers from Rock Springs, Afton and Evanston and other towns from across the state as well as soldiers from Idaho, North Dakota, Washington, Colorado, Utah, Texas and California.