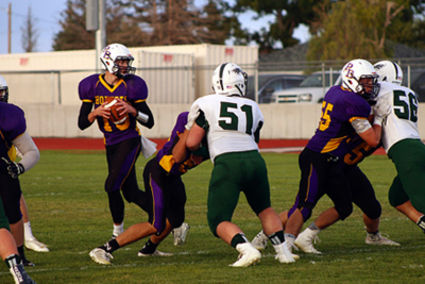 The Pine Bluffs' football team came away from Friday's home game against Tongue River with a near-perfect 51-6 beating on the visitors. The Hornets scored in nearly every way possible while putting the clampse on the Tongue River offense.

"I thought we played well," said Coach Will Gray. "But we are still missing those big chunk plays. We haven't had many big plays on offense and we need to get that corrected."

After Isaiah Montanes ran for a three yard touchdown and Andrew Fornstrom was good on the point after, the Hornets led, 7-0.

The defense came up big forcing Tongue River to punt. The attempt was blocked and scooped up by James Merryfield, who ran the ball in for the second Pine Bluffs score. Fornstrom was again good on the point after giving PB a 14-0 lead early in the first quarter.

"James Merryfield played very well, along with the rest of our defense," Gray said.

On the next score, Haize Fornstrom hooked up with andrew Fornstrom for three-yard touchdown.

Touchdown! (Point after kick by Andrew Fornstrom was good pushing the score to 21-0.

Haize Fornstrom rans for a 25 yard touchdown and the PAT missed so the Hornets led, 27-0.

Brian Steger's two-yard touchdown and a good PAT increased the lead to 34-0.

The next Hornets score came when Hunter Jeffres scored on a blocked punt. Fornstrom's PAT was good increasing the lead to 41-0..

A 24-yard field goal by Marvin Reza increased the Pine Bluffs lead to 44-0..

Merryfield recovered a fumble in the end zone to push the lead to 51-0.

Tongue River got on the scoreboard late in the game and the final score was 51-6. 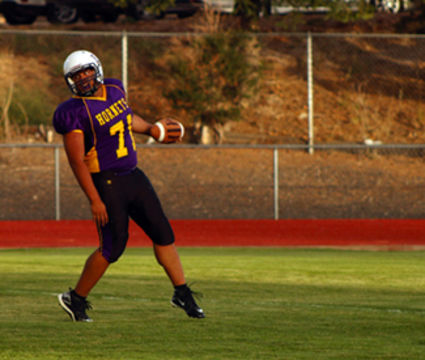 "The kids are coming along" Gray said. "We are playing physical and competing each and everyday.  We have a long ways to go, but I like where we are at right now.  With that said we have a lot little to things to clean up and get better at."

" As we prep for Lusk, we go in knowing they are much improved from a year ago"Gray said. "They only have 16 or 17 players but they play very hard and are physical.  We have an appreciation for kids who play football the way it is supposed to be played.  We need a good week of practice, and need to get better with each rep in practice.  We have to prep for teams with the same attention to detail we had for Big Horn and Mitchell.  There are no easy weeks in our league."

They are capable of doing great things.  Now the trick is to have that effort on every play from here on out."