Fall brings season to an end... while restoring history goes on 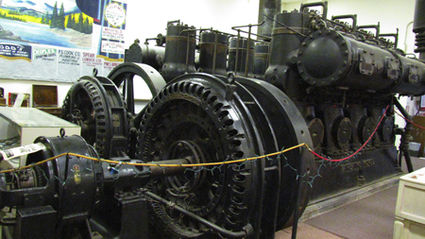 On display is the two diesel engines and generators from the Town of Pine Bluffs old power plant.

Summer has come and gone which brings the closing of the doors of the Texas Trail Museum for the season. This is a process that has been taking place since 1988 when the museum opened its doors with three exhibits on loan from the Wyoming State Museum.

The Texas Trail Museum became a reality due to a donation of articles of clothing belonging to Katherine Smith from her son and Charles Binning in 1985.

Binning presented the clothing to the Pastime Club. From here they ran with the goal of a place to have to display local history, fashion and artifacts.

The articles of incorporation were signed by three members of the Pastime Club in April of 1986 and the Board of Directors was formed.

Members of the Board of Directors went before the Pine Bluffs Town Council and inquired as to the possibility of leasing or donating the town's old power plant building for use of the museum. After going through all the safety checks and other factors, the Town Council offered the Texas Trail Museum a lease in effect for 99 years.

The building houses two diesel engines and generators approximately 12 long by 10 feet high. They are part of the museum and their history is displayed.

Two years after the formation, the doors opened and Pine Bluffs preserved history of the area as well as being a crossroads for many historical travelers.

Pastime Club member, Alice Benedict went before the Pine Bluffs Town Council asking them to donate or lease the town's old power plant. This became a reality after much inspection and some renovations.

Many repairs and remodeling issues were completed making available more room for displays and artifacts. Sidewalks, doorways and other items were improved for handicap accessibility. A new cement floor was installed due to a grant from the Mountain Bell Foundation. Union Pacific Foundation awarded the Texas Trail Museum with a $4000 grant in 1988 to cover the new wiring and electrical update needed for the building.

Season closing that year brought on more renovations. A suspended ceiling was installed, along with the leveling of the cement floor. New carpeting and an alarm system were also installed during the winter season.

Private donors and other grant programs began to participate and more displays were in place for the next seasonal opening. High school students volunteered that year as the hosts and hostesses during the summer off of school.

During the fall of 1989, Union Pacific railroad donated a caboose to the Town of Pine Bluffs. It's resting place is on the museum property. Other grants were received to repaint the caboose. Union Pacific donated new decals for the outside of the caboose.

During this time the Town of Pine Bluffs was working towards the purchase of the Walker property known as the Boarding House that would complete the triangle block parcel. The building was kept and is used as part of the museum complex today.

Continued growth was seen for the museum. In early summer of 1990, the Muddy Creek School House was obtained from the Dolan Ranch. The school house was built in 1879 and was a great addition to the history of the area.

The grand opening of the Texas Trail Museum and dedication of the Union Pacific Railroad caboose took place in August of 1990. Governor at the time, Mike Sullivan provided the official opening, with historic speakers, and entertainment present.

As the years have gone by, many new additions and donations of artifacts have been done.

The closing of each season brings more donations and artifacts. "We are the history savers and makers" stated museum curator, Mary Chowns. "We look forward to sharing history for a long time to come."