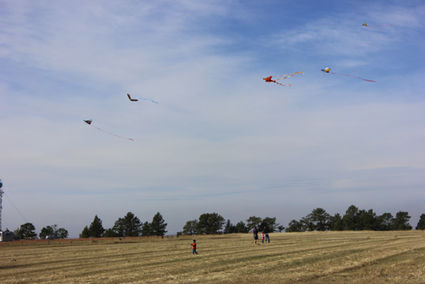 Participants of the First Annual Kite Festival send their kites to the sky.

Blue skies and flying objects were seen over the Bluffs on September 30, at least from 11:00 a.m to 4:00 p.m. It was the Pine Bluffs Kite Festival sponsored by the town of Pine Bluffs Parks and Recreation as well as Roger Hinckle/kite advocate. Mr. Hinckle handle the contacts with the professional kite flyers. The parks and recreation department had purchased 100 kites to be handed out to children 14 and younger, 99 was distributed.

Hinckle travels around April through September participating in different festival through out the country and the world. Hinkle's one desire is to go to India to experience the "Fighter Kite Festival." During the rest of the time the Hinckle's raise 4 children as well as work a regular Monday through Friday job. There were four other professional kite flyers that participated in the event.

Avery Fredrickson from Burn participated in the festival. Thg. Fredricksons had received a flyer from the Burns school letting them know about the event.

Approximately 200 people were estimated to have participated for the first year. Competition were in three different age groups 11 years old and under, 12 years to 16 years, and 17 year and older for highest kite, longest tail, etc. However all that came out and enjoyed the nice weather and beautiful skies were winners.