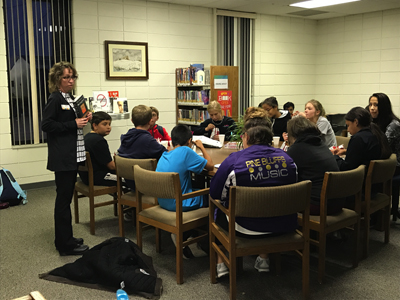 Mary Cushings discusses one of the books to students of Pine Bluffs Jr./Sr. High School.

Banned Books? Students, grades 7-12 got the chance to learn about some banned or challenged books and the reasons why.

Many of the books that are banned or challenged are taken off of school or library shelves when there are complaints about content, such as language, violence, religious themes, etc.

The students had the chance to read a few lines from a banned/challenged book, and listen to community member, Robert Simkins read two of his poems. Instead of clapping, everyone snapped their fingers, just like in the '60's with poetry slams.

The winner of the banned book challenge game was a high school student, Ashley Fabela. Each competitor had to fill in the blanks to titles of banned books and attempt to name the author and a possible reason for why it was challenged or banned.

Afterwards, they had the opportunity to create "secret book safes" using old donated books to create a hidden space inside for hiding treasures or important items.

The Banned Book Slam had 16 children in attendance and hope to make this an annual event each September.