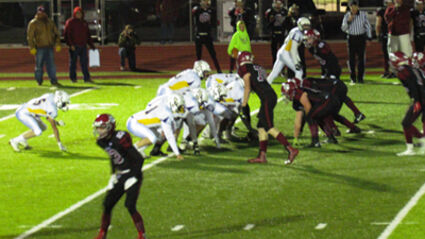 #10 Haize Fornstrom prepares to take the ball under center, #55 Hunter Jeffries against the Tigers defense.

Hornets traveled to Lusk on Friday, September 29, and cinched their fifth victory for the season.

Three minutes into the first quarter, #10 Haize Fornstrom scored the first touchdown for the Hornets. The extra point kicked by #20 Andrew Fornstrom was good and they didn't look back as they took command of the field.

Running from the 45 yard line, breaking away from 6 Tiger defenders after the pocket collapses, # 10 Haize Fornstrom scored his second touchdown of the night. Completing the sweetness of the touchdown, #20 Andrew Fornstrom scores the extra point making the score 14-0 in the first quarter.

Heading into the second half Hornets kicked the ball to the Tigers. Failing to score the ball was turned over to the Hornets.

In the third quarter, Hornets attempt a field goal. The attempt was just short of an extra three points and the ball was turned over to the Tigers. 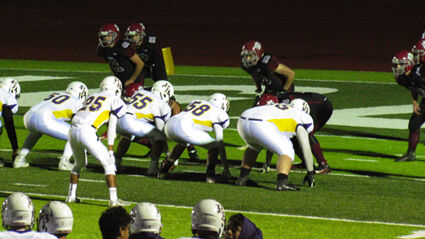 The Hornets offensive line gets ready to run the ball into the endzone.

The Tigers took the ball down field and scored a touchdown. They followed the touchdown with a 2 point conversion pushing the score to 14-8 in the 3rd quarter.

Total number of touchdowns by the Hornets were 5 with the final score of 35-8.

"We started off really well by scoring on our first three drives and holding them 3 and outs.  The kids were focused all week and prepared very well.  In the second half we didn't play with a lot urgency or emotion, which is something we need to fix.  The kids compete each and every week, which is a blessing to have as a coach." stated Coach Gray.

This week Hornets play Wright who has a good young quarterback.  He throws the ball well and makes good decisions.  They have some speed on the edge, so we will have to be aware of what they are trying to do by formation and down and distance.