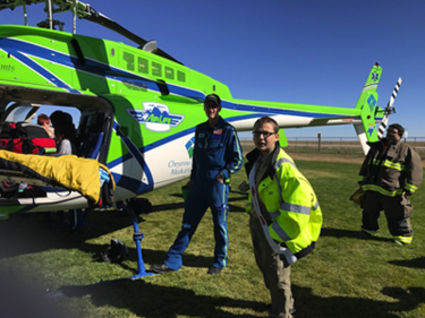 John Bartels, center with the crew from the CRMC Flight for Life helicopter.

Bartels, the son of Jeff and Lyssa Bartels,from Burns, is also certified in first aid and CPR, as well as a first aid instructor for the Boy Scouts of America.

Included were representatives from District 4, District 6 EMS and EMT, District 5 and Cheyenne Flight for Life. First aid was demonstrated and taught as well as CPR, skills from all districts were shown off, from the "jaws of life," securing patient before transporting, first aid table, high end rescue and demonstration of companion dog in training.

CRMC demonstrated the helicopter's use and informed the crowd that the life support given by community and local services helps make the patient's chance for survival more likely. As well as individuals with CPR knowledge.

District and council from the BSA commented, "This is the largest and most encompassing project they have seen, and it was extremely well organized."

Approximately 50 people of all ages attended and participated in the event that started out with a breakfast prepared by the Eagle Scouts Troop 101.

Bartels in the beginning stages of planning this very impressive project, applied to the Burn's town council to solicit for needed funds to help with the breakfast supplies.

This 13 year old put together, all the stages and different presentations, including troop 101 cooking pancakes for a free breakfast. 630 volunteer hours went into this project, the typical average scout volunteer project is between 80-140 hours. John's guiding force for this project was a mixture of passion for first aid (his hope is to become a trauma surgeon; as well as his dad, Jeff, is a EMS), the other goal was to bring awareness to the public of what goes into bcoming a volunteer for the fire and rescue, the need for more volunteers.

Troop 101 will be a 101 years old this year. On October 14 from 10-5 Cheyenne Lions Park will be hosting a birthday celebration for troop 101. Memorabilia will be on display, and the Eagle Trail Book logging all Eagle Scout projects, which is reviewed by the district scouting board.

Now that the project is done, Bartels has to finish a final project report, go through a Scoutmaster conference and then do a board of review for his Eagle rank. The board of review is similar to an interview. It is done in front of a panel of four to five adults. If he passes the board his paperwork is sent to the national Office for review. Once reviewed and approved he is presented his Eagle rank and given a charge as an eagle scout. Only 4-5 percent of all scouts complete the rank of Eagle Scout.

The Scout Lodge will be open for tours..

Big shout out to all that participated!!!