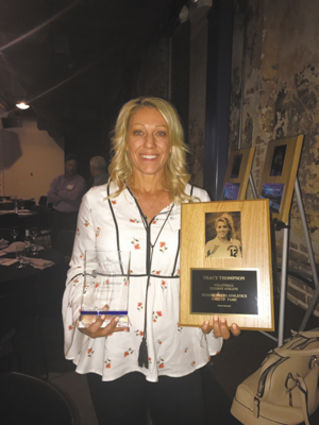 Tracy Thompson stands with her awards for being inducted into the Hall of Fame at Metro State University in Denver, Colorado.

Former Pine Bluffs high school volleyball player, Tracy Thompson repeats her killer skills on the volleyball court at Metro State University and this has brought her accolades in the present.

Thompson was inducted into the Metro State University in Denver, Hall of Fame. She was a member of the Roadrunners volleyball program during the 1992 and 1993 seasons.

Thompson led her team to the Colorado Athletic Conference Championships in 1992 and 1993.

Thompson was named the 1993 AVCA Regional Player of the Year.

She had 592 kills in 1993 which ranked her fifth all-time for a single season.

Thompson is the daughter of Debra Childress and Steve Thompson. Granddaughter of Ruth Tipsword, all of Pine Bluffs.