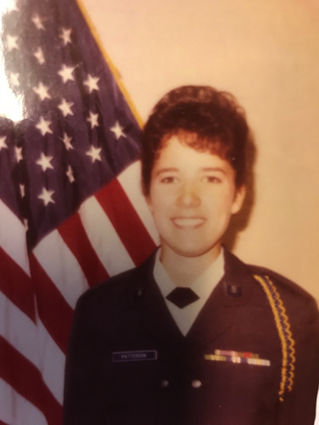 Kim Patterson as a cadet.

Structure, commitment, rules and regulations in the United States Air Force life was not a new routine for Kimberly J. Patterson.

Having graduated high school from the Academy of Notre Dame, in Tyngsboro, Massachutsetts rules and regulations were common practice. After taking a six month break from school, Patterson attended Saint Anselm College in New Hampshire.

Patterson made the change to the University of Massachusetts in Lowell, and joined the Air Force ROTC program. Appying herself, as she had learned in Catholic schools, advancing was a goal she had set.

Graduating in the top one percent of her class, earned Patterson a regular commission in the United States Air Force in 1988.

Wanting to see a different part of our country, Patterson volunteered for her first assignment in Minot, North Dakota. She had just spent time in Biloxi, Mississippi for training and headed to the north in February. It was a weather shock from Mississippi to North Dakota for this young officer.

Patterson's first assignment was to bring the ratings of the inspection of her assigned area from an unsatisfactory to an excellent one. "I attribute everything I learned at my first assignment to having an outstanding NCIOC (non-commissioned officer in charge) and these lessons still carry with me," stated Patterson.

While at Minot, Patterson was selected to be one of the escorts for the Chiefs of Staff on a tour of the sites. "This was very interesting, and is one of my fond memories." Patterson went on to state, "my training and experiences in the Air Force, have helped me achieve where I am now."

Soon, she was transferred to Wurtsmith Air Force Base, Michigan. Her experiences there were to help repair for base closure. Wurtsmith was decommissioned in 1993.

Patterson's next assignment would find her at Beale AFB, near Marysville, California. Patterson worked in the aircraft maintenance program, and after making captain, she left the military and changed careers.

She was working for a company back east, and was close to many military personal during 9/11. "We were all family, in the military" reflected Patterson.

Her career would take a change and she would find herself at F. E. Warren AFB, in Wyoming working for the housing contractors for the base. This would bring her to her next stage in life, town treasurer for Pine Bluffs, and her fiancee, Jared Ziteck. 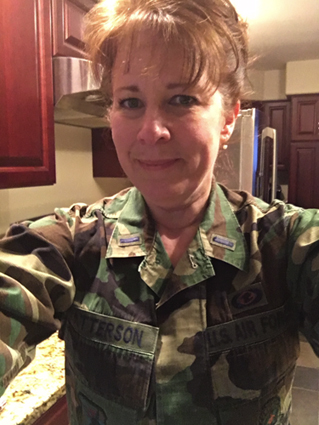 Kim Patterson in her uniform from years past.

"Looking back," Patterson said "I don't want to say that I regretted my decision it's just that sometimes I'm sad. I didn't stay until I retired and I miss the camaraderie. I had some classmates and very close friends that lost their lives in Desert Storm and one of them who lost his life in the bombing of the Khobar towers bombing. It was a sad time!"

Reflecting on it I feel as though I didn't quite give it as much as I could have. I think that no matter what job position I have been in since being in the military I am always been very committed and dedicated to my employer, doesn't matter whether I'm working part-time making sandwiches or working full-time as a community manager or as a town treasurer I know this is my commitment and this is what I'm here.