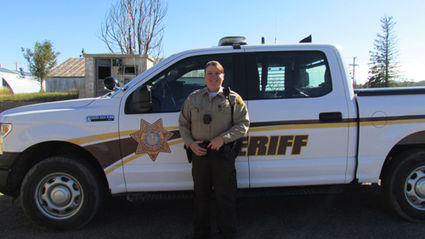 Char Madden outside her patrol car.

In recent decades there have been great strive for women entering professions, more than in the 50s, 60s and even the early 70s. This is apparent with Deputy Sheriff Char Madden.

Madden knew at the young age of ten that she wanted to be a police office, which was influence by Dean Jackson who recently retired from the district attorney's office. Jackson was a detective with the Cheyenne police office, which is where Madden grew up and went to school. During this the time, two D.A.R.E. (Drug Abuse Resistance Education) program officers Debbie Stowe and Keith Task also help Madden enforce this profession for her future. Cementing the law enforcement path was the high school career testing, two different career were chosen with higher marks in the law enforcement. College professor, Bill Bonds laid out the guidelines for becoming a police officer, including starting with the sheriff department. After graduations Madden work for the municipal court in Cheyenne until she was old enough to apply to work for the county jail. At the municipal court Madden scheduled bench trials for the judges and processed warrants. When Madden became 21 she was able to apply to work in the jail as a deputy. Madden work for the local jail from 1999 to 2000 when she transferred to Greeley for a year. The commute became an issue then making it realistic to go back to the local jail. Promoted to sergeant meant she had the run of the jail during shift, along with a staff of 8-12 deputies. In 2009 decided to take a break from the jail, taking a job at the Accessors office; but found that was not as fulfilling at the same time Madden was continuing on a part-time basis with the sheriff department. Madden was hired on in 2012 with the Pine Bluffs police department on a full time basis for four years, when an opening came up in the sheriff department for patrol. With two different job task there was a need for two different certifications (detention basic and patrol basic) with the addition of 40 hours every year of continues training.

Madden is not only train in CPR and basic first aid; but has a special certification in EMR (Emergency Medical Responder). EMR is a fairly new specialty and Laramie County are all encouraged to get the certification.

Madden can be seen patrolling, as the resident deputy, for the eastern Laramie county, as an instructor with the D.A.R.E program in the area schools (inspired by Kurt Wilson a recently retired deputy) and patrolling part time for the Pine Bluffs police department. Madden enjoys this community that she has been a part of since 2001 when she married and moved here. Madden puts in approximately 43-48 hours a week working for the sheriff's department as well as an 8-10 shift for the Pine Bluffs Police Department which includes her D.A.R.E. instructing. Madden is hoping in the future she will move into detective work, which she has taken the training for. as well as continuing with the D.A.R.E. program, currently Madden is teaching in Burns and Pine Bluffs.