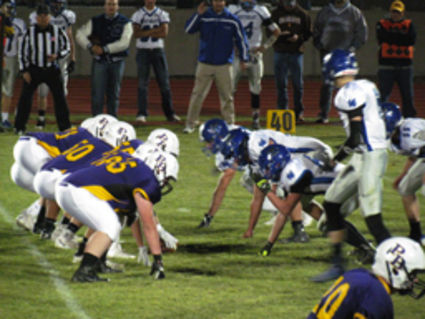 Hornets offensive line gets in position for another run for a touch down. #65 John Merryfield, # 58 Bradley Shmidl, #55 Hunter Jefferies, #50 Wyatt Fornstrom and -# 71 James Merryfield.

The Hornets entered the game huge underdogs. Having lost the last 22 home games between these two teams. It seemed that things were not on the side of the Pine Bluffs Hornets. However this time was going to be different. This time the Hornets had their stinger primed, ready and sharpened to razor sharp perfection. Revenge was in the air and the Hornets were not to be denied.

The Hornets wasted no time in showing Southeast who was king of this field. Scoring 14 points in the first quarter and then another 7 by halftime. They sent a message that they were here to play. The defense was just as overpowering not allowing the Southeast offense to score a point in the first half.

The excitement was high as the Hornets took the field for the start of the second half and they did not disappoint the fans. Scoring another 7 points in the third quarter while not allowing Southeast to even see the end zone.

Finally in the fourth quarter Southeast was able to put points on the board with a 1 yard TD run by #2 Brandt Fullmer. The extra point was no good. That was the only bend in an otherwise solid and dominating performance by the Hornets. When the final gun sounded the Hornets had broken the losing streak by a score of 41 to 6.

Haize Fornstrom #10 was the leading scorer with a solid performance of 4 touchdown runs, completing 10 of 19 passes with 1 TD and a total of 153 yards. He also ran for 69 yards on 11 attempts. .

However this was not a 1 man show. Isaiah Montanes #22 ran for a total of 63 yards on 14 attempts with a 17 yard blast for a touchdown. Brian Steger #19 also contributed with 11 carries for 29 yards and Seth Tangeman #12 had a 20 yard carry. However this was not just a ground game. Andrew Fornstrom #20 caught 7 passes for 104 yards while Ishmael DePaulittle caught 3 passes for 49 yards. This was a solid and dominating performance by the Hornets Offense.

But what would the offense be if the defense was not as over powering. Holding the strong Southeast offense to only 86 total yards and allowing only 6 points, recovering 3 fumbles and intercepting a pass from quarterback Bradley Fullmer #4 sucked all the wind from the offense and solidified the Hornets position as the team to beat this year.

Hunter Jeffres #55 lead the defense with 6.6 tackles followed by Colby Lamb #15 with 3.5. Haize Fornstrom #10, Seth Tangeman #12 and John Merryfield #65 each contributed with 3.0 tackles in this dominating performance. "I thought the kids played physical the entire game, and we tackled much better than we have in the past against Southeast. Southeast is very young and will be good in the future. This was the first time we have them at home since 1995." -- Coach Gray

"This week we have a tough task. Upton-Sundance is a very good team. They have some very fast kids who run hard, so tackling is going to be big. We cannot have missed tackles this week. Defensively they are as solid as we have seen this year, and they have a good pass rush so we will need to get the ball out quickly." Gray said.

But lets give credit where credit is due. Southeast Beck #20 ran 59 yards on 16 attempts while Lovercheck #1 had a 26 yard reception.