By Roshelle Flores and Cody Jones 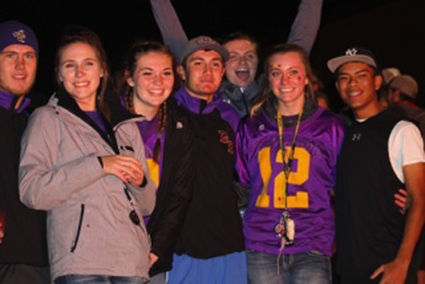 Homecoming is more than just a football game and a dance, it's a whole week of activities. The theme this year is The Wizard of Oz; Monday was opposite day, Tuesday was beach day, Wednesday was farmers day, Thursday was red carpet day, and Friday was pride day. There was also a homecoming parade on Friday at 1:15.

Are you the good witch or wicked? Opposite day was Monday. Some people teamed up and did opposite twins or opposite colors while the rest dressed as their opposite gender. Bruce Oakes and Monica Sujka dressed in opposite colors as one another. Oakes dressed in all white while Sujka dress in all black. After school, students went to someone's house to work on their floats for the parade. Now, if you're wicked, watch out for a falling house that might squash you.

Tuesday was lather up in sunblock so you don't rust like the Tin Man. This "beach" day was where students dressed up as if they were going to the beach. This was to represent the Tin Man who needs oil so he doesn't rust as we need sunblock to not burn or "rust".

Wednesday was dress like a farmer to honor the Scarecrow. Students looked to the skies because they didn't want to lose any straw being ripped apart by the flying monkeys. The Hornets were able to find their courage by the time they played the Cyclones.

Thursday was a day for students to dress their best to meet the Great and Powerful Oz! It was known as the red carpet day.

Friday was HORNET pride with PURPLE AND YELLOW. Students, staff, and fellow community members wore their Hornet shirts, and purple and yellow to make because there is no place like homecoming.