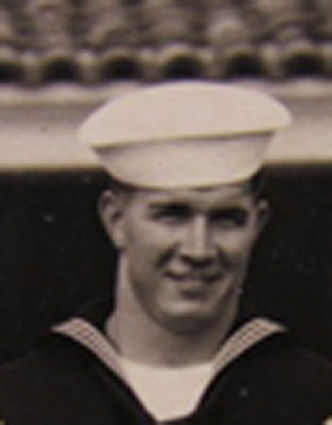 Marquart fresh out of basic

Standing tall, this lanky boy of 18 years entered into the Navy. Merlin Otto Marquart followed in his brother's footsteps as they led him to the Navy as his brother did out of high school.

Marquart became a Navy corpsman. He served his time aboard the USS Lake Champlain. This aircraft carrier was the older wooden deck carriers.

Being the tall man he was, Marquart explained, " I banged my head more than once below deck. Actually saw stars a couple of times!" He went on further to explain that his brother who was stationed on a destroyer said you learn to duck! "You stay clean and never had to duck into a foxhole!!"

Marquart entered the Navy just as the Korean War was ending and just before the Vietnam War really got into action.

He was stationed at Key West, Florida.

Being a corpsman, in the medical field he found himself in the dental area. He worked with the other medical personnel. Mainly he would work the night shift and there were times he was there as the medical person.

Marquart would get around by hitchhiking or get hops on military planes to go see his girlfriend Mary. "One time I hitchhiked from San Diego to Rhode Island. Sometimes I would get a hop!"

"Back then I would hitchhike, people would stop because of my blue Navy uniform!"

Marquart was discharged after serving his four years. He immediately returned to his girlfriend Mary, and got married.

After they were married, Marquart went to college and became a science teacher. He graduated from the college at Witcha Falls, Texas with a education degree.

Marquart would land a teaching job in Denver, Colorado. He would team teach with another teacher, named Jack Fish, who remained a dear friend all through the years. "That was back when we could do more as teachers, some of it not so good....like using mercury etc." reflected Marquart. 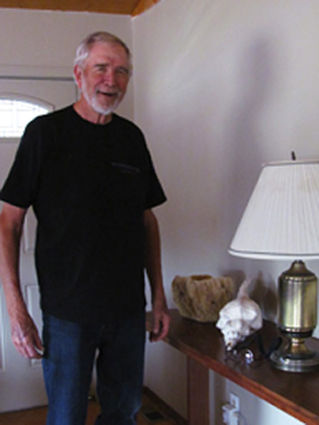 Marquart at home with his sea shells

No regrets, on jobs, Marquart explains. That meant some strange jobs...like the time I got in to moving houses. I would buy a house that had to be moved and would set it up on property." He went on to tell about the house that was too big and needed to be cut in half to be moved.

"Summertime, while I was still teaching I would take classes to be recertified." One class that stands out it was weird, was with Dr. Wilbur the Coroner. I ended up being the only one in the class!"It was an experience and I came out of the class with an A!"

Marquart loved adventure! He converted a school house to a hunting lodge, He worked at a "private eye" shadowing. He treasures his time in Navy. " I did what I had to do to take care of my family.