By State of Wyoming

Statewide Sales and Use Tax Collections declined 8.2 % in FY FY2017 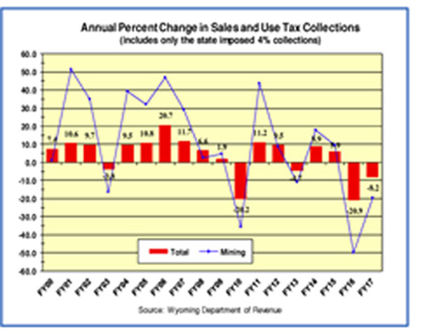 CHEYENNE -- Total sales and use tax collections in fiscal year (FY) 2017 experienced another contraction, according to an annual report released by the Economic Analysis Division.  The report, entitled "Wyoming Sales, Use, and Lodging Tax Revenue Report," is produced annually and contains sales and use tax collection information categorized by the North American Industry Classification System (NAICS) super sector.  In addition, sales tax collections for the retail trade sub‑sector components, and for the accommodation and food services sector are provided in the report.  Also included in this publication are yearly lodging tax collections by local entity.

Total sales and use tax collections in Wyoming for FY 2017, reached $789.9 million, a decrease of 8.6 percent from the previous year level.  The year over year decline rate for the state-imposed 4% tax collections was 8.2 percent, following a decline of 20.9 percent in the previous year.  Because locally imposed optional taxes often change during a fiscal year, an accurate comparison should only include the state-imposed 4% taxes to reflect changes in taxable sales over time.

Both oil and natural gas prices, though still depressed, have rebounded considerably since early 2016 as supply and demand rebalances.  Consequently, activities in mineral exploration gradually picked up, as evidenced by the increase of active drilling rigs in the state from just seven in June 2016 to twenty-five in June 2017.  However, collections in sales taxes continued to experience year-over-year declines in the first nine months of fiscal year 2017, creating a deficit that was not offset by the double-digit growth during the remaining three months.  For fiscal year 2017 as a whole, nearly all industrial super sectors experienced decreases.  Only the utilities and health & educational services sectors showed increases.  The state's pivotal industry - mining (including oil & gas extraction) experienced the worst decline in dollar amount, at 19.6 percent, during the year.  Other industries that are closely associated with the mineral extraction activities, such as construction, transportation & warehousing, and machinery & equipment rental and leasing also experienced sizable declines of between 21.3 and 31.3 percent.  The State does not impose a sales tax on the production of minerals, but on supplies and equipment used in mineral extraction.  Additionally, certain services rendered within an oil or gas well site are subject to sales and use taxation, as are services rendered under contract for mining and crushing minerals.  Collections from the retail trade industry, the largest in terms of sales tax contribution, also suffered a significant decrease of 3.1 percent from a year earlier.  The public administration sector, where sales tax collections primarily reflect automobile purchases, shrunk 1.5 percent.

Total lodging tax collections, at $17.8 million for fiscal year 2017, were up slightly from the $17.7 million collected in the previous year, or 0.6 percent.  However, part of the increase was attributed to changes in lodging tax rate.  Due to lodging tax rate change from 2 percent to 3 percent in Lusk Town on October 1, 2016, the collections in Niobrara County for fiscal year 2017 was 7.8 percent higher than the prior year.  Pinedale in Sublette County increased their tax rates by 1 percentage point on April 1, 2017.  As a result, the lodging tax collections increased 10.9 percent in Sublette County from fiscal year 2016 to 2017.  For all other counties, Park was the only one that demonstrated double-digit growth rate (10.4%), and Teton and Lincoln counties also showed robust growths of 7.8 percent and 6.1 percent,   respectively.

Fifteen counties experienced declines, with Campbell, Converse, and Weston recording the largest drops at more than 20.0 percent, each, in lodging tax collections during the period.  The primary drivers for the fluctuation in lodging sales are visitation to the national parks and mineral activities in the state.