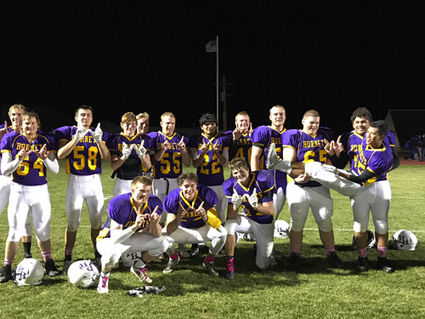 In a close game between our Pine Bluff Hornets and the Upton/Sundance Patriots, the Hornets proved again that they are still and will be the team to beat.

With an all out team effort the Hornets beat the Patriots by a score of 28 to 14. However the game was not as lopsided and the score would seem to indicate.

Neither team was able to take the advantage in the first quarter as it came to an end with neither team able to reach the end zone.

The second quarter showed the Hornets offence scoring first with 32 yard Haize Fornstorm #10 pass to Andrew Fornstrom #20 for the first score of the game. The point after was good by Fornstrom. The Patriots came right back with a 4 yard run by #12 Louderback for a score. Point after was good and the score was tied.

However the Hornets were here to play and Haize Fornstrom ran 71 yards for a Hornets TD. The point after was good and the Hornets never looked back.

Heading into the locker room at halftime with a 14 to 7 lead the Hornets were still not out of the woods yet.

As the 3rd quarter started the Hornets took the advantage and scored another touchdown on a fumble caused by #71 James Merryfield and recovered by #40 Kyle Thurin for the score. Point after was good and now the Hornets had a comfortable lead of 21 to 7.

However, the Hornets were not done yet. The potent offence scored another touchdown in the 3rd with a 4 yard run by #22 Isaiah Montanes. Point after was good and the Hornets were up a confident 28 to 7 going into the 4th quarter.

The Patriots were able to score one more time with a 79 yard pass from #12 Louderback to #20 Butts for the touchdown. The point after was good. With a final score of Hornets 28, Patriots 14. 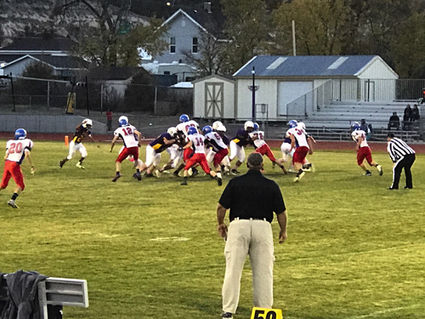 Below the line defends.

Haize Fornstrom lead the way with 7 carries for 125 yards with #19 Brian Steger close behind with 16 carries for 86 yards. #22 Isaiah Montanes had 16 carries for 51 yards in a great game. On the other side of the ball #55 Hunter Jeffres lead the defense with 8 solo tackles, 1 assist and 1 interception. Number 65 John Merryfield had 4 solo tackles and 1 assist while the entire defense proved too much for the Patriots to handle.

Congrats to the entire Hornets team and we look forward to another dominating performance next week.

"Our defense took a few series to adjust to their schemes but once they understood the concepts they played very well. In the second half sophomore Kyle Thurin played his best half of football so far. He is a player that keeps getting better and better each week." Coach Gray