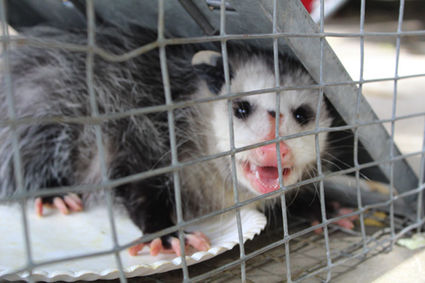 A trapped opossum expresses his dismay at being caught at the residence of Mrs. Adels.

Heading into winter many people are experiencing some crazy encounters with mother nature and her many little critters.

As winter creeps around the corner, many wild animals are seeking shelter. These animals include raccoons, mice, opossums, and even skunks. Things on the priority list of some of these animals are of food/water, warmth, and shelter.

Many of these animals will seek out animal food such as a bowl of cat or dog food you might have sitting outside for your beloved animals but other animals won't stop some of these animals.

Many animals will just simply kill other competition to survive. For example one of the residents in the area Mrs. Annabel Adels, and her son, Doug Adels went outside in the garage to feed his kittens. He saw the bag of cat food moving around so he reached in to grab what he thought was a kitten but turned out being an opossum.

In this situation he was very fortunate that the opossum played dead instead of immediately attacking. The Adels managed to catch it in a live trap a day later to deal with it on their terms. However, a situation like this could have ended up with a more unfortunate ending than it did.

When the cold weather finally rolls around, wild animals are desperate to find food and shelter. Not all animals are as nice as this one its always better to lock up any food that may be in reach of these animals.

Another good idea is to seal up access to rooms or areas that are not often visited by people, such as basements, attics, crawl spaces, and some walls made of drywall. Animals like these are not only unwanted roommates because they are pesky but they can also be very damaging and dangerous.

Animals such as squirrels like to chew on wires and wood which could cause fires and foundation problems. There are a few ideas to consider when you are trying to prevent such things from happening.

Options like trimming trees, branches, or bushes allowing for these animals to have a direct route to the house.

Locking up pet food which could supply an easy and fast meal for many wildlife critters.

Resealing any cracks in the house, foundation, or windows that would allow animals to get inside.

Also taking trash out promptly and making sure all trash lids are closed tightly. These ideas are  just a slim choice of all the things that can be done to prevent such unfortunate events. 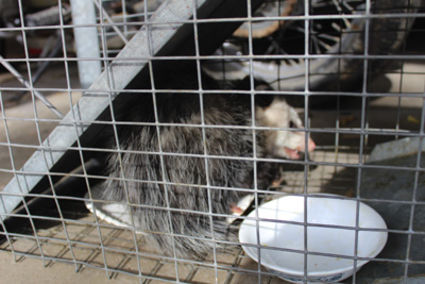 If you by chance accidentally end up with one of these animals in your house, the best thing you can do is call the animal control in your area.

If you don't have any other animals in your house you could always set a live trap but those are never guaranteed. Also after using a live trap you will have to decide where you would want to relocate or even euthanize the animal.

Doug decided that he would either release the animal on his property or relocate it closer towards the mountains.

There are many different opinions as to the best route to go with trapped wildlife. Preventing it is the first step. Going into winter is change enough but dealing with such things as wild animals, can make it quite dangerous also.