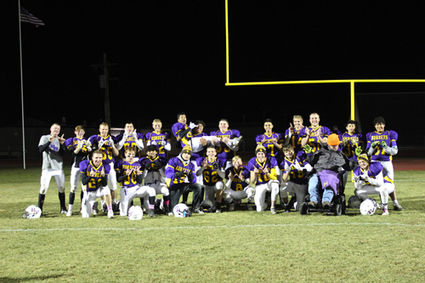 What a fantastic game! For hosting the first home playoff game since 1949 the Hornets did not disappoint. Pine Bluffs boys played hard and left no room for mistakes.

The Hornets had scored three touchdowns in the first 8 minutes. The score was 21 to 0. "I dont think we could've played any better or been more prepared this week, we had the mentality that Saratoga was going to come out  play and hit hard but we knew we needed to play and hit just as hard if not harder. I couldn't have been happier with how the team played tonight." said Haize Fornstrom #10.

During the last half of the game Pine Bluffs decided to go for a field goal in the end of the 3rd quarter with 35.9 seconds left in the game they made a great decision beacsuse the score was now 52 to 0. 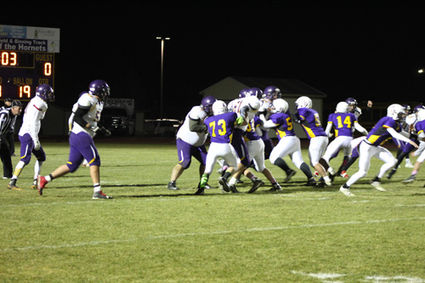 Finally in the 4th quarter with 5 minutes left in the game Haize Fornstrom intercepted for a touchdown. The score was then 58 to 0.

The three game leaders for the week were #10 Haize Fornstrom  with 8 completions with 109 yards and 2 touch down passes. Another leader was #19 Brian Streger with 7 carries for 46 yards and 1 touch down. And finally #20 Andrew Fornstrom with 5 receptions for 67 yards and 1 touchdown. Although these are the "game leaders" none of them could have been successful without the rest of the team.

The Hornets are a great example of what teamwork is. They play hard but also work hard when they know it's  needed! Good luck on Friday boys!

"I think we played well, we were balanced on offensive and defensively, we tackled well and our quarter back was very athletic he just scrammbled."