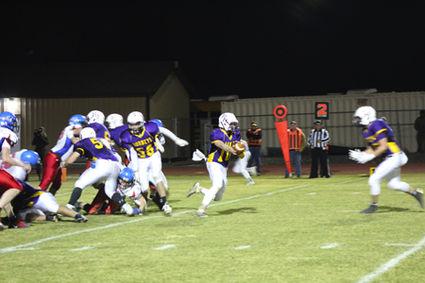 Last weeks game Pine Bluffs vs. Upton-Sundance was a tough one. Not only was it a chilling 36 degrees at kick-off, but both teams were evenly matched in the sense of player's skills and abilities. Not scoring until the 2nd quarter made for an intense game. The coaches on both teams and all the parents were on edge.

In the first quarter neither teams managed to score any points but they played hard. At kick off Upton-Sundance's #46 Landon Martin kicked the ball to the 15 yard line with a return to the Hornets by #20 Andrew Fornstrom.

During the 2nd quarter the Hornets finally scored with a touchdown made by #10 Haize Fornstrom with a 7 yard run.

#20 A. Fornstrom made a successful kick earning an extra point for the Hornets. Score was 7 to 0 with the Hornets in the lead. The fight didn't end there though.

In the 3rd quarter, #19 Brian Steger ran for 3 yards scoring another touchdown. A successful kick made by #20 A. Fornstrom adding the extra point. Coach Grey said "Our offensive and defensive lines played very well for the most part. Upton-Sundance is a very good team and they made some adjustments from the first time we played them.  It took us a little time to figure things out but we ran the ball much better once we did.  Defensively we tackled as well as we have all year." 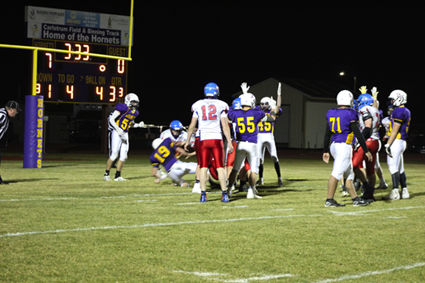 The Hornets fought strong in the 4th quarter. The boys didn't let the any of the penalties set them back. Granted Upton-Sundances #20 Watt ran for a 20 yard touchdown with an extra point the boys didn't slow down or take it any easier. They kept going and managed to keep Upton-Sundance from scoring again.

The final score was 14 to 7 for Pine Bluffs Hornets. The Hornets are now continuing on to State where they will play Big Horn in Laramie. Good luck this weekend Hornets!

"Big Horn is one of the most athletic teams we have played. They have athletes all over the field, and they are very good upfront. They are very balanced on offense, and have several great athletes they can get the ball to. Their quarterback is a sophomore, but he doesn't play like a young kid. He makes very good decisions, and rarely turns the ball over. Our kids need to compete and be assignment sound. They are very good at taking advantage of mistakes and can score in a hurry." -- Coach Gray